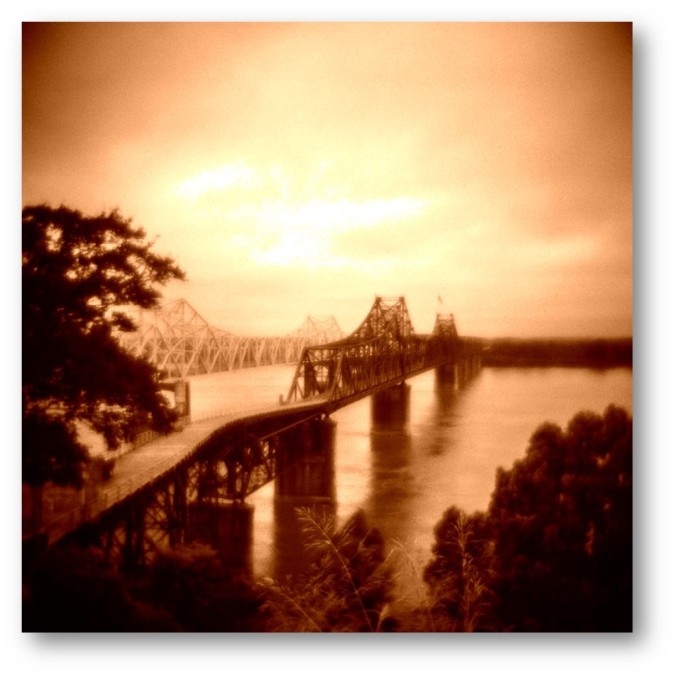 “If a man harbors any sort of fear, it percolates through all his thinking, damages his personality, makes him landlord to a ghost”. – Lloyd Douglas

I had crossed on over, with the darkness rolling in, and the Stateline of Mississippi, made me pause to think of him, maybe it was thirty years ago, but it seems like yesterday, just seconds really to watch a story in display.

He says the sun it sets in ragged pieces floating humid from the sky, tearing soft red hazy parts of heaven hanging them low above Vicksburg to dry. He says you might not really know me, and I would not look too far back into my eyes. You might see a little more than Mississippi lightning, in the places my tears have gone to dry. The dark birds seem to float down by the river, guarding old men fishing last meals and telling tall lies; a young man stands and sticks a needle in his arm, and curses the flies who are passing by.

He says the night it falls upon the water, I hear her begging to be fed. He turns and motions to the Yazoo, to fill the river brown than red. He says the soil above us holds a dead nation of those dumb farm boys how they bled. One hundred years and fifty-five more, all those ghosts are crazy. A million carrion in my head. The old man sniffs and looks on over at the young man lying dead. The needle sticks up like a steeple, sending signals that no one read.

The low clouds light up a candle, a low light that bask in need. Curtains of mist hang over Vicksburg, magnolias bend to receive. The old man haunts the shadows, the grave markers sink beyond retrieve. Antebellum meets the future, of deluded thought and greed. For one old man walks past burial, one young man dies in need. The past is like the present, for the hungry no food is received. The old and new look to the low hung sky, and wonder of their deeds, their many hidden deeds.

He says the seconds slow in Vicksburg, like the cliffs overhead, their lives a hundred different caverns holding the past and present dead. He says each it has it’s story, an unspoken bit of cred, that, that makes its footprint in the lineage of coming heads. A bit of South filled Gothic that’s often read but never said. He turns as if he’s ninety, no doubt he’s already dead, and he motions up from the river, to the lights dim overhead. He says the witches they are coming, in the dimness up ahead. And I know he’s kind of crazy, with the liquor that he’s had, but I can’t help but think he comes from somewhere in the seconds inside my head.

He says the sun it sets in ragged pieces floating humid from the sky, tearing soft red hazy parts of heaven hanging them low above Vicksburg to dry. – 08.28.2018 – דָנִיֵּאל

68 thoughts on “Vicksburg (Seconds Inside my Head)”