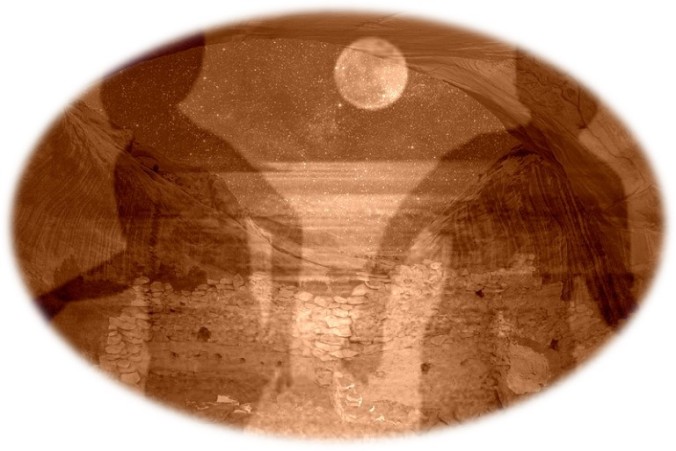 “Where were you and where are you going? Here I built the ruin in the stone-crushed. Sage leaves my hands scented as long ago. When I liked to press the desert against my head to think”. – Dan Beachy-Quick

“Testimony – Evidence or proof provided by the existence or appearance of something”.

When we were boys of youth, we found a secret, a rock filled wall, and tunnel that led away and yes, I know it is time to tell a secret; the moonlit ruins are calling me back today.

They came to be under moonlight, a ray a world time away, with hallow calling to hallow, what is lost can always be retained. White air it moved between kivas, lovers of smooth rock and clay. A rattle with chips of dried bone broke the silence, in a world lost to time and date. The river ran without speaking, low water a drought of malaise. The tall cottonwood bending toward; looking to cast doubt at its own shade. The tall bluff across the shallow water births the large shadow of gray. The night it could lead to delusions, or render a story or two, there could be a death by the ruins of forever, or a life born in imagination new.

They came to be under moonlight, near a tunnel, a time warp of old worlds and new. One boy could say to another, lets cross the electron tide to take a view. The tunnel it went into a new space, a fourth of dimensional view, a round room centered by an altar, with a well of water beneath its purview. The spirits of the ancient’s cried endeavor. Bring your eyes so wide into the center of our view. By the ruins beneath this center, know what every pure mind would do. It seemed as if the round room grew closer. The fortune of the night at once renewed, for the moon shifted to a small peephole, and displayed all the colors and all the hues.

They came to be under moonlight, the last of testimony, the chosen few. The ruins of old cried out for an attention, one boy looked to the other and made it true. They came forth from the tunnel into the open; they came into the light under the moon. There it was they swore an oath blood given. The ruins would be the secret they knew.

The ruins are a true story, found sometime late in the spring of 1972, by the San Juan River, by my pal Jason and I. Others probably knew of them, but we found no evidence that they did. One summer night in July of 1972, we followed a spot of moonlight there. This is a fragment of our testimony. – 04.17.2018 – דָּנִיֵּאל

68 thoughts on “The Ruins by the River”