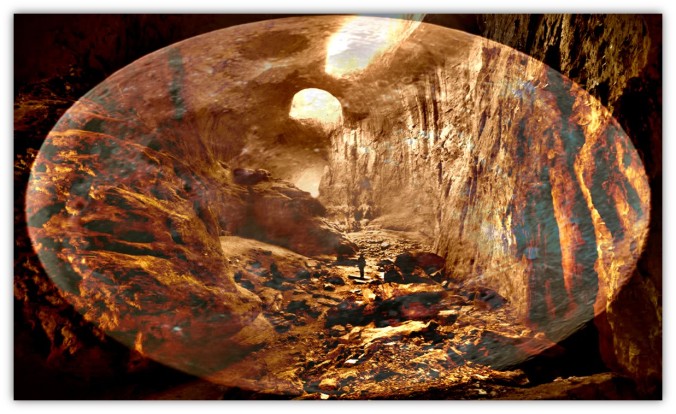 When your hiding underground, the rain can’t get you wet.

But do you think your righteousness could pay the interest on your debt?

I have my doubts about it. – Arcade Fire

I was young and I also aged, and spent my time surveying in a modern cave, while money was flowing all around, I spent my time underground. For seven by seven and seven years on I been searching these caverns of mystery till dawn. I’m no David with stars all around, except maybe those six points I think that I’ve found, the talking spirits of G_Ds underground, the ones that come out when your down. Immune from the dungeons that would frighten most so, not this explorer who followed his goals, led by fluorite, iridescent my soul, discoveries made without reading a scroll, the rumble of change is so near. Underground!

Such corridors of darkness, and rancor and gloom, hiding from somewhere to get somewhere soon, a circle still walking, hiding and damp, still all the mystery’s, the unpaid debt, a covers a cover when your enemy’s not around. Oh Adonai, can’t I stay underground. I stride to go deeper in mind here I go, still above me there’s chatter where life it still grows, the walls of these caverns shows mysteries of man, a sign of a doctrine, I need to understand. Underground!

It could be my faith wasn’t developed at all, or maybe the interest was what I saw on those cavern walls. It could be a stranger that passed in the night, when I was a boy sleeping oh so light, by destiny’s doorstep where magic lies, the Lord of compassion took me by different rites. He whispered such secrets, the cave knew such light, everything happened without much a fight. I was born to the tribe by the moon, Shekinah she showed me the way from the womb, Ma’arat HaMachpelah the immortals tomb, there I cried, in judgments eyes. And then I found my way out to the sun, to the sun. From underground! – 02.21.2017 – דָּנִיֵּאל