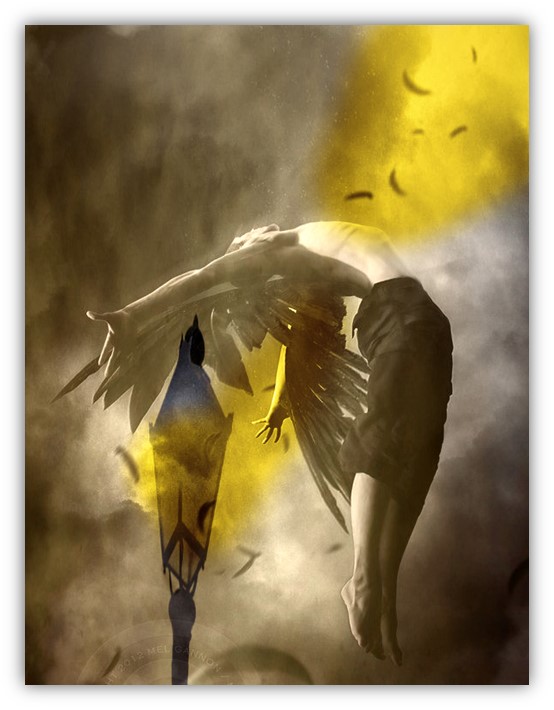 He comes home after a long day of papers graded on his back. A is for following, a B is for falling back. Schedules and meetings, that overtime he does, keeps him reeling, he hardly looks above. He thinks that’s there’s goodness, but it’s not in this earthly stuff, and what’s deep inside him, could hardly take a shove, without him screaming, I think I’ve had enough. Deep in the evening he dreams of clocks and afternoons, Wall Street is reeling, this nightmare will have to do, and steely eyed managers watch carefully, and make a fuss. It’s four in the morning, and his eyes are open wide, he checks to make sure he’s breathing, his breathe seems gone inside.

For in those small filled corners, those places he don’t bother, that ancient closet opens from the world outside.

And the dark lord does arise, his finite rage devised, he unfolds his wings so infinite, rest his wrath on predicates, lifts his blackness to the sky, and it draws light. The angel turns inside the man, takes ahold his vessel thin, calls down fire, and says, “light up your lantern and try, you’re not in this world to die”.

The day dawns, the city cry’s, a world is done, looks red in eastern skies. He awakens, and skips his shoes, he wouldn’t be able to tie a lace if he could. His work will have to wait, he has to go outside and play. The workplace calls at ten, his cellphone rings and rings down low where the gutter ends. He puts his easel straight, and points his finger into the air and laughs and shakes. His paints come in spray, a master artist commands the day. Around him people stare, his painting of the lantern is so rare. For from each side it tends to move, a continuum of G_Ds own mood, one side revolving stark, drawing in light from somewhere dark. Drawing in light from somewhere in his heart.

The angel turns inside the man, takes ahold his vessel thin, calls down fire, and says, “light up your lantern and try, you’re not in this world to die”.

2 thoughts on “Jonas (Light up your Lantern)”