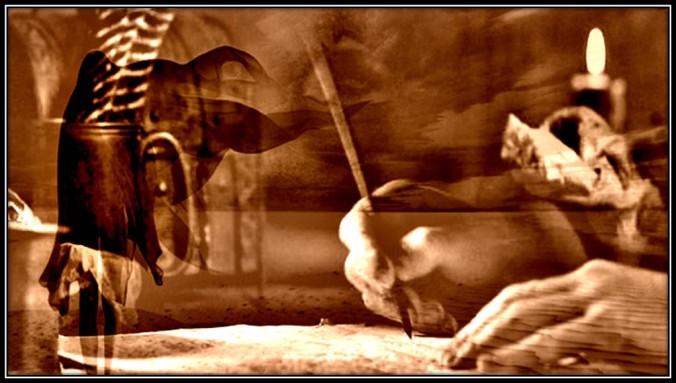 Dante holds the music that he whispers through thyme, it smells like lemon secrets, as it enters my mind, and circles all the thoughts of word, the phonics of night, resistance is futile, why even do I fight. Well Dante holds riddles, those puzzles in me, and just like familiars, and those ghost who can see. He moves me and dazzles, and laughs while I’m blind, not grasping the candle, he just needs to light. In houses, and doorways, and double odd binds, with kisses for favors, a Daemon unkind. This spirit, apostle, just wants me to write, find fortune in secrets, a poet’s delight. He moves in the spaces my old muse died, makes fun of his funeral, and laughs at my rites. Oh Dante please tell me, of why do we fight, with words of confusion, and spells of the night. We should be together, our psyches held tight, but somehow you use me, and snarl when you bite.

Dante runs highways, through deserts and sands, he hunts in desolation, for hidden lands, and sometimes he listens, and passes a word, but often he’s silent, asleep in his verbs. Forgotten in reason, he will not take a stand, on verbiage, or letters, controlled by my hand. And often he measures, my prose, with a laugh, and shoots vowels behind me, and then tips his glass. Say, Dante I’m naked, my soul is so scratched, from hauntings and pictures, your words so mismatched. If you are forever, a shimmer of light, then be me immortal, a muse that won’t fight.

Its shadows, of answers, dictated by fright, long caverns in darkness, that bring me to sight, and Dante, it’s sudden, the life in my hands, the treasured scripting where loneliness ends. Dante he’s smiling, expression in name, and taunting my story, he says it’s too tame. No hero’s for writing, that’s simply insane. Dante’s not giving, he’s gone once again, no doubt in the Artic, just walking about, but soon he’ll be closer his coldness in me. I’ll write that indifference, I’ll learn what he sees. I’ll learn what he sees. – 05.14.2015 – דָּנִיֵּאל